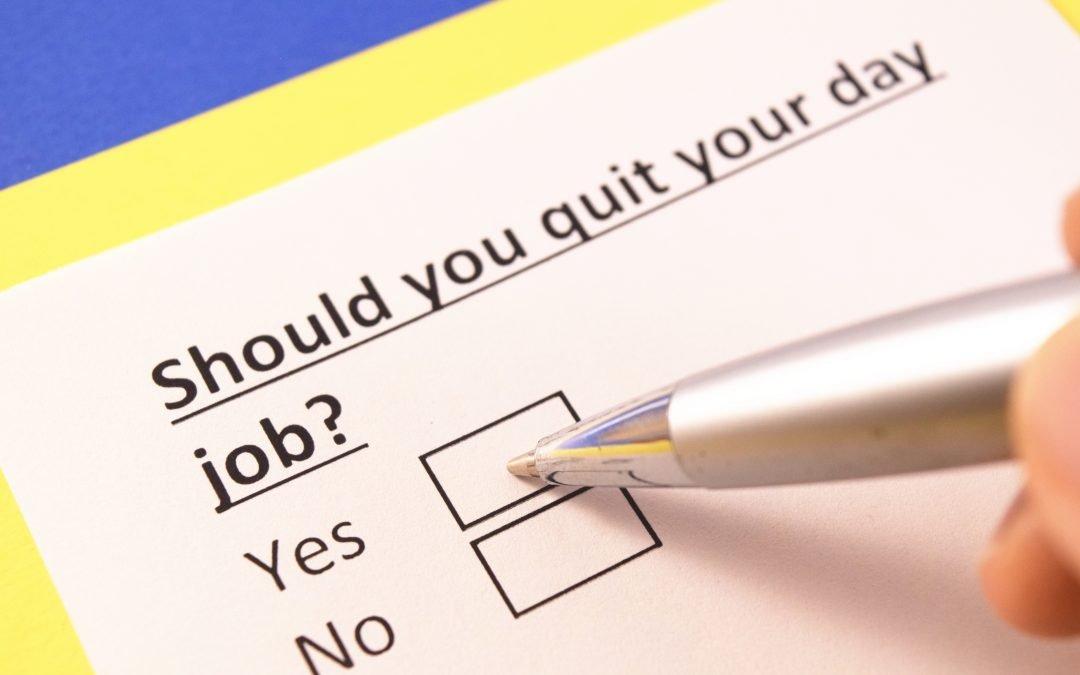 Maybe I should just quit. Maybe you should, too.

Quitting still has a bad name in our culture, even after a worldwide pandemic persuaded a bunch of us that maybe it was time to move on from unsatisfying jobs.

Meanwhile, millions of us hang on to a job we hate, a relationship that stopped being satisfying years ago, or a hobby that’s lost its luster.

Our bias against quitting shows up in less consequential matters, too. We’re bound and determined to finish books we don’t enjoy – because we started them.  We eat food we don’t really want because it’s there on the plate, and see plays that don’t appeal because we bought the subscription, we have to go to this one.

We’re steeped in the notion that winners never quit … and quitters never win.

Grit—now that is highly valued. We admire the ones who stick it out, stay the course, reach the finish line.

Who applauds the person waving the white flag, tossing in the towel, or flaking out?

Turns out someone is cheering for those of us who cave in, give up, abandon ship. That would be Annie Duke, who wrote a whole book about when to say “when.”

Quit: The Power of Knowing When to Walk Away grew out of Duke’s years as a professional poker player. The pros, she says, know when to fold ‘em. That’s what sets them apart from the amateur players who hold ‘em for one more deal and wind up losing big.

Duke says we over-value grittiness at the expense of, well, here’s how she puts it: “Unlike grittiness,” she says, “there aren’t that many positive words for quittiness, as evidenced by the absence of quittiness itself from the dictionary.”

She concedes that grit can help us stick with a worthwhile project and see it through to completion. Duke points out grit can also cause us to stick with a project that would have been better off abandoned.

Maybe you’re already thinking about a project of your own? I certainly am.

None of this is to question our intelligence or fortitude. In fact, even smart, savvy people fall victim to faulty thinking about how to avoid loss.

You might have an example in your own life of the sunk cost fallacy. When we’ve already invested time, money, and/or effort into a project, a relationship, or a job, we’re loathe to call a halt to it.

That would mean we’ve wasted everything we already invested, right? God knows we don’t want that, so we plow ahead, hoping to turn things around by dint of will and elbow grease.

The truth is, the investment’s already been made.

We can’t get the time, money, or effort back. When it becomes clear that a project, a campaign, or a relationship isn’t going to end well, that’s the time to stop investing already. Yes, that’s when we should quit.

That old warning about throwing good money after bad was made for someone hooked on the sunk cost fallacy. And Duke points out that most of us are hooked on it much of the time. Including people who “know better.”

Like the researcher who studied this entrapment problem his whole career. He also climbed mountains. He was on his 100th climb when a heavy fog rolled in and his climbing companion said, “It’s time to turn around.” The guy was determined to reach the summit, after all he’d put into it. Two days later, they found his body on the mountainside.

Duke says just knowing about our biases doesn’t seem to help us overcome them. The urge to grit our teeth and keep on keeping on is just that strong.

There’s more to it, of course. Loss aversion factors in here. Winning feels great, but not losing feels even better.

We’re driven by the desire not to lose.

Happens all the time that someone stays in a job they’re not crazy about rather than take the risk of finding a new one. After all, what if I don’t like the new one? It could be out of the frying pan, into the fire!

Fear of losing out can keep us from quitting when we’d really be better off.

Still, even with the forces that keep us from quitting when we should, we’re not helpless.

Here’s what to do.

Duke suggests looking forward instead of backward at what’s already transpired. Set “kill criteria” in advance. Lay out the circumstances that would make your current situation so bad, you’d definitely make a move. Then if those things happen, you’re primed to take action.

You might consider a quitting coach. A colleague, a friend, a mentor … someone who knows you and understands the situation you’re in. And who can be more objective about it than you can. Unlike you, they see the water you’re swimming in. And they can give you the cue to jump out of it.

I’d add that it helps to mind the language we use to describe our situation, not only to others but in our own thoughts too.

If I talk about myself being stuck or trapped, my situation can become a real quagmire and movement gets more and more difficult.

If I say I’m fighting a losing battle, my decision to quit can make me feel vanquished.

And much as I’ve mocked the current enthusiasm for “pivot,” asserting that I’m pivoting sure beats caving in, giving up, or turning tail.

With all of this talk about quitting jobs or teams or relationships, it’s not as if there’s nothing worth your grit. Sometimes we hit a rough patch, buckle down and work through it, and come out on the other side better for the experience.

That happens. It’s just worth considering what to do when it doesn’t happen.

As Annie Duke says, “Success does not lie in sticking to things. It lies in picking the right thing to stick to and quitting the rest.”

Are your wheels turning about what you should quit? Tell me about it in the comments.