Are Women the Wishy-Washy Ones? 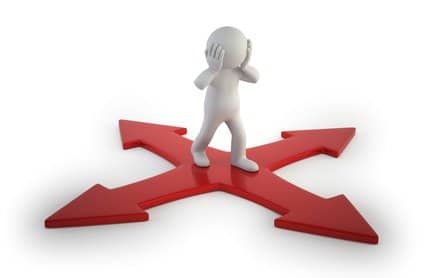 You’ve probably encountered would-be clients or customers who just can’t make up their minds. They vacillate between yes and no. Or now and later. Or the super-duper-deluxe package and the econo-version.

I ran into a rash of those recently and got to talking with other entrepreneurs about the flip-flopping would-be, won’t-be customers.

Mine ran the gamut:

Business coaches will tell you – or at least they tell me – to stay on those people. Keep following up until they change their mind back again. Get them to go with their first, sound, impulse to buy. I don’t know. I’m all for persistence, but I don’t want to pester people who’ve already said “no.” Even if they did say “yes” first.

One friend whose business has customers of all sorts pointed out the common thread in my will-I-or-won’t-I clients. They were all women.

Her experience: men say “yes” and mean “yes.” Or they say “no” and mean “no.” Either way, doing business with a guy, she tells me, you know where you stand.

Her female clients, on the other hand, frequently dance back and forth between the “yes” and the “no.” Often several times, before they finally land on one side or the other. And it’s common for them to put the whole process in motion, pay their deposit … and then back out because. Well, because … whatever.

It’s an interesting perspective, isn’t it?

I’m inclined to think communication style enters into this, as much as gender. Maybe more. Highly analytical people are slower to make a decision than those of us who are more direct.

They tend to need more information, more references, more answers. It can be tough to get them to make up their minds. An impulse buy? It horrifies them.

Very direct people are different. They go with their gut. Sounds like a good idea to them? They’re likely to jump in with both feet. (Sometimes to their later chagrin.)

They don’t need a bunch of research and repeated meetings to say “yes” to a proposal. And they don’t go through that seemingly endless process of second-guessing a decision they already made.

When I teach workshops on communication styles, people often complain bitterly that those direct folks are too brusque or too rude or too difficult to sell to … or to work with.

Truth is, when you’re selling anything, the straightforward sorts are much easier to deal with than the give-me-one-more-proposal people. Direct ones hear an offer, they weigh it quickly, they make up their minds and move on. And they don’t call you tomorrow to say they “Oops, I’ve had second thoughts.”

My own style? Yes, I’m pretty direct. I do tend to make quick decisions. (And yes, I’ve lived to regret a few of them.)

I like that better than “Make the decision. Then waffle until you have no idea what’s right.”

Curious about your experience. Do you circle back for more data and second-guess your choice? Or are you in the decide-and-move-on camp?

And what do you make of the gender connection? Just a coincidence, or are we women really more likely to agonize about what to do and renege on deals we’ve made?